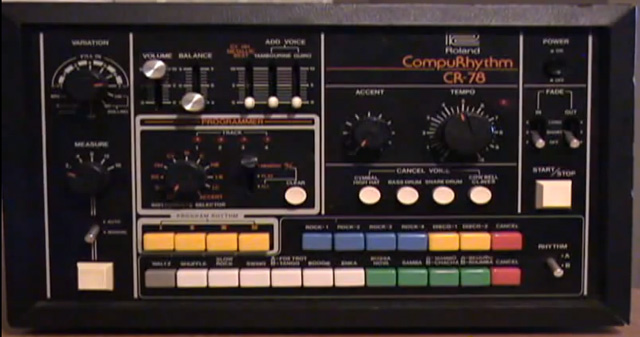 What do Ultravox's "Vienna", Blondie's "Heart of Glass", and Phil Collins' "In the Air Tonight" have in common? The answer: a quirky drum machine from Roland called the CR-78. This not so little box featured transistorized discrete circuits to create its 14 drum sounds and a very early digital sequencer that had 34 preprogrammed rhythms as well as 4 user programmable patterns. Slim pickin's by today's standards but in 1978, the date of its release, it was quiet an object of desire. Let's find out why...

On the surface, the CR-78 doesn't have a lot to offer if not taking the sound and feel into consideration. The preset rhythms attempt to cover a wide range of musical patterns. Rock and Disco make their appearances as do Samba, Waltz, Boogie, and something called Enka. If those don't satisfy, there are four user programmable rhythms, however, the caveat being that only four different sounds can constitute the rhythm. That means that if you punch in a kick, snare, hi hat, and accent, you can program no more. There is a user definable fill in function that can either automatically vary the main rhythm with many selectable preset variations at the 2, 4, 8, 12 or 16 bar interval, or almost instantly with the push of a button. I say almost because all pattern switching is quantized to the end of a measure, just as on the TR 808, 909, and 606. This is also the case for the pattern A or B switch that selects between variations on the same pattern (this works only for the preset rhythms).

There is a master start / stop button which has two switches above it to regulate a fade in and fade out. This is a really interesting function because it allows the drum machine to slowly increase in volume after hitting start and, similarly, decrease after hitting stop. There are two different rates that are set by the switches (short and long).

There is also a slider for volume, and one for balance. Think of it as a bass and treble crossfader; at the very bottom there is no signal of hihats and cymbals present and at the very top most of the low end instruments disappear and the overall frequency response is a bit brighter. Next to this slider are another set of three sliders that control the volume of the cymbal, hi hat, and metal beat sound on the first slider, tambourine on the second, and guiro on the third.

Around the back, there are two mono outputs that sum up all the different drum voices (the same signal only at high or low impedance, hence the two outs), a trigger output that can be used to drive sequencers at either straight 8th or 16th notes or at the sequenced rhythm of the accent, a write input for writing patterns, a start / stop input for starting and stoping the sequencer, and an input to manually switch the variation function.

Beyond the ability to program user patterns, quantized switching of patterns, automated fill in functions and some control over the general volumes of the different instruments, there aren't too many features to speak of. The CR-78's biggest selling point, beyond the sound, was the user programmable slots and the fact that the drum machine could sync to a 12 pulses per quarter note signal. In a tape environment, if you could generate such a signal, you would have a drum track always in time with the pre-recorded music. Not so bad for 1978. But again, it's the sound and feel of the unit that really give it the legendary status it so proudly holds today.

Style is one thing that there is no shortage of on the CR-78. Every single drum sound feels absolutely expertly crafted and molded to work together as a uniform drum kit. The hi hats ooze bossa nova cool with their gentle filtered noise tone. The snare and kick punch hard without loosing definition in the bottom-bottom and the mid. The metal beat clangs away at a steady Kraftwerkian pulse and really does sound just like the name suggests. Absolutely every sound on this machine is not only usable but can be incorporated into almost any style of music. This is due to the fact that these sounds all layer very well with real drum kits, as well as other drum machines. There is just something to the sonic signature of the CR-78 that gives it this "just right" tone that always seems to work.

The other aspects to the stylishness of the CR-78 are the feel and timing of the sequencer. I don't know how Roland went about it, but a person could leave the CR-78 running on a single pattern in the background of whatever they are doing and never, ever feel the slightest annoyance. There is so much movement, subtle sync variation and oddness to the sequencer that it just never gets old hearing the same thing repeat endlessly off of the CR-78. Feel free to leave it bubbling along behind any track and it will instantly add a je ne sais quoi to the tune, courtesy of it's quirky sequencer.

Since there have been no direct clone of the CR-78, the original is still pretty much the only place to get the complete package of stylized and analog sounds with a quirky, feel-oriented sequencer. While some have attempted to make Eurorack modular modules of the CR-78 voices, there is nothing on the market right now that allows for the accurate CR style sequencing that the original innately has.

Similarly, people have sampled the CR-78 (probably more than any other drum machine), and while that does give you an approximation of the tonal flavor, it is still only a static approximation rather than the fluid and organic vibe of the real deal.

With sync boxes and programmers available (Future Retro Swynx for example), this is one lethal box of audio sex that is still valid, useful, and one of a kind. With the aid of a couple of sync boxes that give the CR-78 MIDI sync and easy programming abilities, it will sit perfectly in the modern electronic musicians arsenal of production toys. Buy on sight if the opportunity appears!