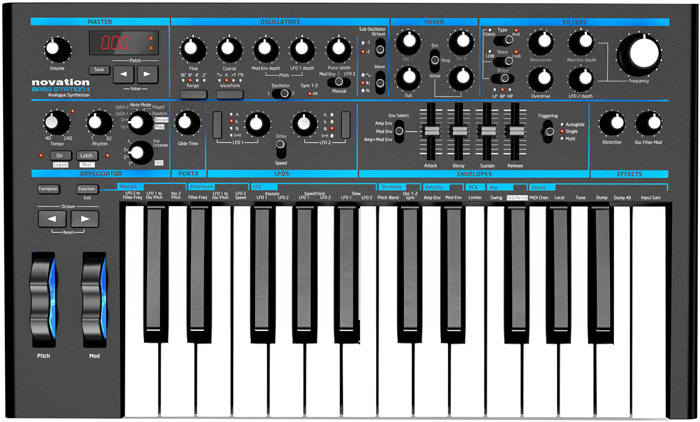 At some point, in 1993, Novation got their act together and developed a true analog monophonic synthesizer titled simply the Bass Station. It was cheap, it was cheerful, and yes, it made bass sounds. They were probably the first in the 1990's to confront the analog synth and unlike other designs to later emerge from Waldorf (see the Pulse), the chief engineer responsible for the little wonder was Chris Huggett, a synth builder with a history of heavies. Chris Huggett was the man responsible both for the EDP Wasp and the Oxford Synthesizer Company OSCar synthesizers. He probably single handedly defined the British invasion of synthesis for the 1980s.

Hence it was appropriate that Novation, a British company, hire him on to lead the development of the Bass Station. Chris redesigned his original Wasp filter, built some analog but digitally controlled oscillators, and Novation packaged their first product (a two octave MIDI controller) with this synth voice. Some minor color changes, knob additions, and the like and, ta-da, the Bass Station!

Fast forward to 2013 (a year post the analog synth craze and the height of the revival of [proper] synths), and Novation are back at it, paying homage to their analog roots with the Bass Station 2. And if you think just because it's made in China this go around it's any less the proper English synth, think again; Chris Huggett is back on the case designing the internals and ensuring that this new Bass Station is as every bit fantastic as the first that built the Novation name!

So what's on offer with the Bass Station 2? Well, it's still black and blue colored as the original, the case is still made of what feels like bulletproof plastic, it's also still two octaves on the keyboard, but, and this is a big but, the voice architecture has changed dramatically and there are tons and tons of knobs and switches. Big knobs and little knobs, that all feel super sturdy, are quick to turn, but give off that nice "brand new synth" resistance.

There's ton's going on under the hood so I'll do my best to give you the general picture and wet your appetite. The Bass Station 2 is a dual oscillator monophonic analog synthesizer. It features oscillators that are under digital control for tuning purposes, TWO genuine analog filters (one of which is multimode and can operate at 24 and 12dB slopes), several analog stages of distortion at different points in the signal path, and a generous number of digitally generated modifiers (2 envelopes, 2 fully featured low frequency oscillators, plus full arpeggiation and 32 step sequencer … YOWZA!)

But if you think Novation stopped at just two oscillators, you're actually, well, kind of wrong. You also have an insanely endowed sub oscillator with three different waveforms! There's a sine wave for adding a low fundamental, and then two square waves (one with a narrow pulse, and one genuine 50% full square wave). There's also a ring mod, a noise source, and even an audio input to process external signals. And guess what, tons of controls for setting the volumes of all of these!

Before diving into the sound of the Bass Station 2, let's take a look at one of the main selling points of the synth: the full arpeggiator, step sequencer and hands on control.

I've often wondered why no other manufacturer has taken a stab at including a version of the Roland SH 101 sequencer onto a mono synth. It's fast to enter a sequence (just punch in the notes from the keyboard), you can transpose the sequence to your heart's content via the keyboard, and you can still get the quirky results that only a hardware sequencer can provide. Well, Novation were listening and what you have on the Bass Station 2 is actually an improvement on the 101 sequencer. It works exactly the same way: punch in your notes, hit the handy rest button for rests and tie button for ties, and this time, you have 2 bars worth of note memory! If you want to transpose a sequence, simply press a different key and the sequence will play back in that new transposition! Also, unlike the 101 sequencer, you don't have to hold some silly transpose button to make this happen, just press a key and your off. The other wonderful aspect of the Bass Station 2 sequencer is that you have four global memories for you sequences. That means when you power down, your work is not lost as on the 101.

The arpeggiator, much like the sequencer is another class act. All possible arpeggiation modes are represented including a random and as played modes (the arpeggiator will arp based on the order of the notes played). It also has an amazing four octave range as well as a handy rhythm mode, which allows you to quickly dial in different timing resolution (jumping from straight 16ths, 8ths, 8th triplets … to preprogrammed rhythm patterns). But, here's the best part, the arp and the sequencer all transmit over MIDI. That means you can control any of your favorite synths with the arpeggiator and the sequencer!

Taking a look at the Bass Station 2 you'll also see a beautiful control interface that screams "TWEAK ME!" Everything is logically laid out and easy to access. Novation employed switches to assign certain controls a double function. For example, you have a full set of oscillator controls but they can only address one oscillator at a time. Flip the switch to change the "focus" to the other one and tweak away. This reminds me of high end digital consoles that have a single full channel control set but many individual channels. Sure, you only get to tweak one section at a time, but at least it's all the controls and no menu diving. Mitigating the problems that arise with this kind of control interface is the envelope section. There, you still only have one set of controls (this time beautiful sliders) but there is a switch position to tweak both envelope 1 and 2 at the same time!

All in all, I'm in the camp that there is absolutely nothing wrong with this interface and I have never felt confused working on the Bass Station 2.

To me, it is an outrage that the Novation Bass Station 2 has remained a sleeper hit. And I don't really know why because for all the people crying out for a modern SH 101, this is, in a way it. The sound that Novation and Chris Huggett have concocted really is in the Roland style department. The oscillators do not feel like DCO's at all. They move around and feel fluid. Detuning them gives you that width and warmth you expect from a purely analog voltage control design. The pre filter mixer gives you the saturation you would expect from running several oscillators at full volume, but, if that's not enough, the filter section gives you an additional distortion pre-filter!

There are two filters on board and both sound fantastic. If you want the classic Roland squelch stick with the classic filter. It gets fully resonant very quickly and has that round ness we associate with the SH range of synths. If you want a deeper filter, switch over to the Acid filter and get ready for some heavy bottom and mid. And this isn't even scratching the bandpass or high pass modes of the Classic filter!

In short, the sound capabilities of the Bass Station 2 are stunning and for anyone looking for a convincing, modern, mono synth that sounds closer to the revered old stuff, this is your box!

I chose the Bass Station 2 as one of the main synths in my live rig partially because of the sound and partially because of a no nonsense feature set. It can respond to program changes at speeds that boggle the mind, it has tons of patch memory (128 patches), it fires of at a lightning fast pace when triggered over MIDI, and it has a compact but durable build quality that can withstand the biggest beatings out there. Night after night, it has performed incredibly well and has throughly shaken sound systems to their core. I've always been able to authentically replicate a lot of my signature sounds made on much more expensive and older synths with ease due to the flexible architecture of the synth and the plethora of filter options available (Classic filter at 12dB low pass for that Oberheim 2 Voice Drone Sweep …).

I can't recommend this synth enough. Go out and buy one. Seriously. It is the cheapest and most convincing proper analog mono synth out there, right now. Novation, you've surely made England proud. The next pint is on me.