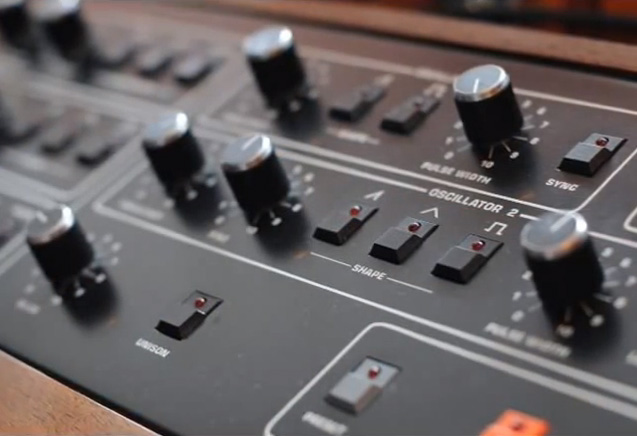 The mighty Sequential Circuits Prophet 5. The one. The only. The king of polyphonic synthesizers. It's the thing that dreams are made of. Wood, metal, large knobs, and a tone that is inarguable and inimitable. There is nothing like it, and still, nothing that comes even close to this analog power house. Let's get some things straight about the Prophet 5 though, that have plagued the "SynthWeb" for far too long. It is not necessarily true that the Prophet 5 was the very first polyphonic synth. Prior to it there were the Oberheim 4 and 8 voice systems, synths consisting of a bunch of Oberheim SEM's and a keyboard programmer. Now, if you see a photo of these synths, you'll quickly realize that you had to program each voice by hand. So, if you wanted a sensical string patch with 8 voices, you had to manually line up each individual SEM to make the same sound. And, considering the unstable nature of analog synths, this was a workout and a half. Also, in the 1970's there were plenty of "divide-down" string machines such as the entire Roland RS range as well as the infamous Arp Solina String Ensemble (and honestly a myriad of others). However, most of these synths were paraphonic, meaning there was a shared filter section as well as, in some cases, non-discrete envelopes. And most of the oscillator designs were based around simple square waves which were then wave shaped through several stages, inclusive of chorusing, to produce the "stringer" sound we know and love.

So, as you can see, there was some form of polyphony before, but what the Prophet 5 did first was to offer a true polyphonic synthesizer voice that was recallable thanks to a brand new, digitally controlled patch memory system. For as analog as the Prophet 5 is in its sound generation, the control section is very much the opposite (digital). And the system developed by Dave Smith and co. for interfacing with stored patches is, essentially the same on most synths since the Prophet 5! Not to mention the other innovations of using the then emerging integrated circuit chips for dedicated synth modules (voltage controlled oscillator, voltage controlled filter … all on a dedicated, little, multi pin chip). So many firsts were established on the Prophet 5 one might not even know where to begin unpacking this legend...

Let's take a look at the basic architecture for starters. The 5 in the name comes from the max polyphony--that being 5 voices. Each voice consists of two analog oscillators, a noise source, one low frequency oscillator, a voltage controlled filter, two analog envelopes, and an analog voltage controlled amplifier. There is a large, 61 keyboard, with slightly shorter key length than some other manufacturers, a mod wheel and pitch bend wheel, a tuning oscillator, as well as MIDI on some models. The keyboard is incredibly responsive on a well maintained Prophet 5. For those that like to cram a million notes into a bar, this is your weapon of choice, especially when the necessary updates and maintenance have been performed on it (chiefly key balancing, new bushings, and the cleaning of the J-Wires).

As you can tell, the voice architecture is pretty straightforward. On the rear panel there is a monophonic output, as well as control voltage and gate inputs. This CV / Gate in is for controlling one individual voice of the Prophet 5. What that means is that when cables are plugged into these jacks, the Prophet 5 reserves one voice for true monophonic external control and leaves you four perfectly good voices for polyphonic duty. If you're 5 has MIDI, it would also be on the back panel.

Additionally there are two very hefty, multi pin connectors that are designed for digital control. These inputs are fully explained in the user manual, including how to wire them up for DIY experimental use. Ideally, you had yourself a Sequential Circuits Poly Sequencer to go with your 5, and thus, used these ports.

Taking a little bit of a deeper look, the novice viewer will inevitably spot the strange Poly Mod section. This is a part of the Prophet 5 architecture located in the modulation area that allows you to modulate the filter frequency and / or Oscillator 1's frequency with Oscillator 2. Ever wonder where those bell and clang sounds came from in the late 70s / early 80s horror films … wonder no more.

Looking at this section it also becomes obvious that the designers of the Prophet 5 were well aware of the Moog Minimoog. By the release of the P5, the Mini had been incredibly well established as the premiere monophonic keyboard of choice, and it's with little surprise that Sequential Circuits implemented some features that a Moogist would recognize instantly. The main one is the modulation mixer that allows you to decide what balance of noise or low frequency oscillator act as the main source of modulation. Apart from this though, and especially in the modulation section, the similarities end and the Prophet walks miles around the Mini's feature set.

It should be noted that the portamento control is solely functional in the unison mode. In this mode, all 5 voices get stacked into one mono, single triggered behemoth.

Features and specs aside, what I'm guessing you really want to know is how come a synth from 1978 is still so very relevant and in demand (have you seen the eBay prices … ouch!)? The answer is very simple, the sound! The Prophet 5 shits ice cream all day, every day. I challenge anyone to make a bad or flat sound on it. Try as you might, it's impossible. The Prophet 5 just does not speak bad. And it doesn't really matter which revision of the 5 you have. They all sound equally good and relatively similar in sound. Wether it's haunting pads, basses, or ominous drones, the Prophet 5 delivers.

It's a sound that is timeless. Truly. In the same way the 808 is timeless. There is an exceptionally pronounced bass frequency range and a sheer punch to the dynamics that few other synths can come close to. And despite the fact that you have heard this synth everywhere, even if you didn't know it, it never gets old.

In fact, a lot of the sounds that the Prophet 5 is very well known for are quite in vogue at the moment. Partially because every band in the world, wether valid or not, is citing John Carpenter's soundtracks as a source of inspiration. Believe me, I'd rather live in this world than the "Nu-Metal in vogue" past I try and forget each and every day, but, come on, you're citing that because the 'cool bands' are citing that. Tangent aside, I love the hell out of these soundtracks and some can be considered a straight demo of the capabilities of the Prophet 5.

Found a really good Prophet-5 demo! There are a lot of crummy ones out there, but this was proper:

If the sound of the 5 is what you seek, nothing but the real thing will suffice. I don't care how many digital or software impersonations attempt to do it, they just can't nail the sheer aliveness of this synth. It feels like a real live instrument, down to its temperament. And what a temperament.

At this point in time however, the Prophet 5 is very old. My hat is off to the band (((Pressures))) for doing it, but under no circumstances would I recommend the 5 for any kind of touring. This is because the innards have aged and rough movement could put something into jeopardy. The 5 can also be cranky so either get really good at repairing it or find someone that knows what they are doing. And trust me, even as a seasoned repairperson, I get scared with the 5 and refuse to work on my own unit. There's plenty that could go wrong especially in the digital section...

Also, not all models have MIDI as standard but most of them can be retrofitted. Not all, but most. There have been three major revisions:

If it's the 5 that you lust, nothing else does it. It's a world class synth and with the right and sometimes frequent maintenance, it will please easily. Single handedly one of the finest synthesizers ever made. But, be prepared to pay handsomely for it and for the maintenance to keep her going.

Note that Sequential Circuits has now introduced the Prophet-6...