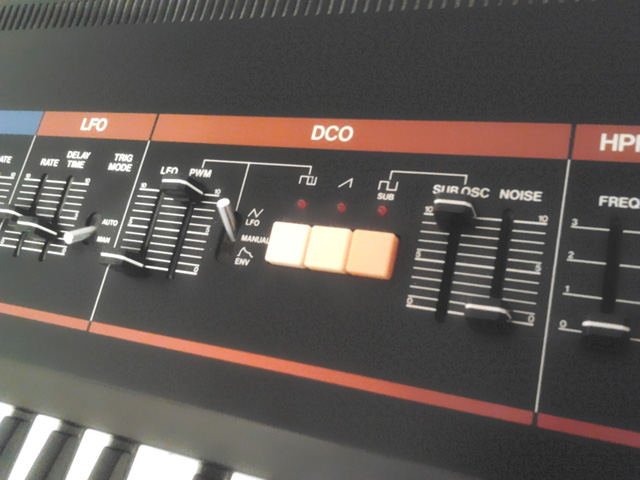 Ah the Roland Juno 60. The working man's synth. The synth for people that don't synth. The instant Pitchfork review for an indie band that is really just an indie band, but by pure virtue of a Juno 60 gracing the stage is now a post punk or minimal wave band. Yes, the Juno 60. It is the only synth that can claim this fame. But, all jokes aside, it is a damn fine synthesizer. Korg released the Polysix in 1981 and Roland was caught off guard. To return fire, the Juno range was born. Forged from Jupiter 8 parts, a new analog oscillator under digital control (Digitally Controlled Oscillator), a mighty noisy chorus unit, and an arpeggio that helped Cabaret Voltaire go disco (or did disco come to them …), the Juno 60 was something to behold if your thirst for synthesis was bigger than your budget in 1982. It had memories, a form of pre MIDI external control (called DCB), a full sized 61 key keyboard, and sliders and switches everywhere. It even had end panels made of faux wood. What's not to like?

The Juno 60, like the Polysix is a very simple and straightforward synthesizer. If the Minimoog falls into the "Player's Synth" category for mono's, then the Juno 60 certainly follows for polyphonic synths. What constitutes a "Player's Synth" to me is that the emphasis is on the musical playing with the programming so streamlined, and the synth engine so tuned, that no matter where you set the controls, something musical happens and doesn't take the focus away from the playing experience. It's the kind of synth that non synth people can excel with.

The Juno 60 has a basic, single DCO based voice (that despite the debates is still analog just with tuning under digital control) supplemented by a sub oscillator (square wave only) and a noise source (swooooosh). This feeds a genuine analog 24dB filter culled from the Jupiter 8. The filter has a notched frequency high pass stage first that allows a user to click in several different hi pass filter frequencies that, as you would expect, increasingly remove how much low frequency energy feeds the filter. The main low pass filter is fully resonant and is tuned for maximum sweetspots. It's actually all one sweet spot and it doesn't take much to dial in everything from a kick drum ping to shimmering strings. As you would expect, there is keyboard, envelope, and low frequency oscillator control over the cutoff frequency.

A single envelope is on board, and this one is super snappy. Like the filter, it is also the same one as on the Jupiter 8, so everything from rapid fire basses to slow moving strings are the order of the day.

The low frequency oscillator is another simple affair, providing only one wave shape but with delay of onset and frequency controls. Beyond pitch and filter frequency modulation, you can use the LFO to also modulate the pulse width of the square wave in the DCO.

There is a gated Voltage Control Amp function that switches from envelope control of amplitude to a simple, organ style note on / note off shape.

You basically multiply this mess by six (the Juno 60 has six voice for six voice true polyphonic synthesis), then route it through a chorus section and there's the Juno 60 in a nutshell.

Things to dive into the Juno 60 are the chorus and the arpeggiator. While it is a little noisy, the chorus section really has a lot to do with the reverence of the Juno tone. For starters, it's stereo, and when recorded in stereo, really widens the imaging while adding a kind of warmth into the mid and high frequency spectrum that only a true analog discrete design can provide. There are technically three modes of operation, with the third being enabled by pushing all the chorus mode buttons in. Just like the Dimension D ;-)

The arpeggiator is of particular highlight because it's incredibly responsive. I don't think I've messed with a tighter and more robust arpeggiator than the Juno 60s. Especially when driven by a trigger from your favorite drum machine. When you program an irregular pattern (meaning not a straight set of triggers) this gives the Juno an almost step sequencer like feel! Not to be missed if you're lacking some inspiration.

And what of the sound? Well, it's a Juno and it's Roland. What's there not to like. It has the ability to punch a hole in a while with it's bass sound. That's right, BASS. But what about the strings, you say? Yes, everyone knows it does good strings, but, dammit man, the bass. You want a tight sequencer style rapid bass? It's there. You want Moogy drug chug? It's there. Aggressive almost digitalish … you get the picture.

In today's world, there are not many choices abound for a proper analog polyphonic. Besides the offerings from Dave Smith Instruments, there really isn't too much left. Also, Roland does not make any synth currently that can even scratch the surface of the genuine analog tone of the Juno 60. Alternatively, even looking at the 106 or the JX range that followed the Juno 60, you still won't get the warmth and pure sound bliss that you get on the 60.

From that standpoint, coupled with the fact that it is single handedly one of the most reliable vintage analog synths (I'm yet to see one with any serious problems unlike say Prophet 5s or even Juno 106s), has memories, and is a breeze to convert to MIDI capabilities (see anything from Kenton with MIDI to DCB conversion or dedicated, user installable MIDI retrofits that replace the DCB), it's perfect for the modern musician. And don't even think that those soft synth offerings from Tal get anywhere remotely close to the real deal. They don't. Those are different languages my friend.

While the used prices of the Juno 60 have somewhat jumped in recent years (gone are the $350 / early 2000s prices) due to the popularity and demand of the synth, it's still a bargain that does not have much competition in the price bracket. You would have to spend way more on a bigger vintage poly, or add a couple hundred more to get your hands on a Prophet 08. If you need this synth, especially if you have a stripped down set up and need something really solid to form the foundation of a lot of sounds, look no further than the 60. It will treat you well.